While reading the Roundabouts thread, I thought of mentioning non-roundabout patterns. But that would have been a derail in a thread that already started as a derail; so I'm starting a new thread. Feel free to mention any patterns at all that you find interesting. I'll start with three:

(1) The "MacArthur Maze." I thought that was just a random nickname for this weird confluence of freeways on the East side of the San Francisco-Oakland Bridge, but Google Maps shows that name. I don't think people actually get lost often in this "Maze": the signage is clear and lane changes smooth. And the freeway names are simple: 80, 880, 580, with links to 680 and 980. (I often wanted to take 24, the freeway not important enough to have an '80' name .)

One weirdness, though it happens about 50 miles from the MacArthur Maze, is that if you continue far enough on 680 East, your road eventually changes name to 280 West!

Something I didn't know until I looked at Google Maps is that, perhaps to pair up with the MacArthur Blvd and Frwy named after the war-time Supreme Commander in the Pacific, 80 or at least part of it, is named after Supreme Commander Europe as the Dwight D. Eisenhower Hwy. (The map scale cannot be too large or too small to see that label; it shows only at a "Goldilocks" size.)

(2) Here's a confluence of major freeways just to the North of Bangkok. Unlike with the MacArthur Maze, heaven help you when you navigate this maze for the first time, especially when driving from Pattaya to Chiang Mai, or to almost any point in North or Central Thailand. There should be signs directing you to the Asia Highway, or one or more of the major cities along the Asia Highway, or just "All Points North." Instead ... follow the signs to Bang Pa-In, a small town just north of the confluence. Coming from other directions it's also very easy to miss a needed exit.

(3) There was an interesting fact (that applied decades ago) about this neighborhood in Paris, but rather than explaining I'll let TFTers try to figure it out in a game of Twenty Questions!
Hint: The peculiar, perhaps record-setting fact depends on one-way streets but I see that at least one of the relevant one-way streets is now one-way in the direction opposite to what it was decades ago. Perhaps city planners recognized the anomaly and corrected it. The restaurants and stores shown by Google are irrelevant, but I don't know how to make them go away.

The one-way directions don't seem to appear for many of the streets; I guess they were interfering with the restaurant labels. It seems a shame that there is no way to suppress those labels. (Google once had the proud motto "Do No Evil." Now "Greedy" and "Evil" are Google's middle names.)

Any other interesting traffic or road/street patters?

I feel like the Maze is not a maze in the sense of getting lost, so much as a maze of frantic lane changes and dubious driving decisions, especially when taking certain routes. 580W to 80E? Easy peasy! 80W to Hwy 24 at rush hour? Good luck! Trying to follow computer directions to go from Jack London to the Emeryville IKEA? The "avoid freeways" button may be your only friend for the next hour. If you make a wrong turn or miss your exit, you can find yourself in what, pre-gentrification, used to be some spicy Oakland neighborhoods as you tried to turn around, which may have added to the reputation. We didn't always used to have phones in our back pocket to steer us back out of those sorts of messes. For a while I lived off of University Ave in Berkeley, and when traffic was heavy, gaining the requisite lanes in time to head east to my parent's place in the Valley was a routine but violent challenge.

Now, if you want a genuinely interesting California interchange, I'd say you want to go down to LA, where the freeway system went through its experimental phase. One of my favovrites is the Harry Pregerson Interchange, ie the junction of the Harbor Freeway and the 105 in Los Angeles, which complicates matters by throwing in a metro station, light rail, and two autonomous express lanes into the mix. 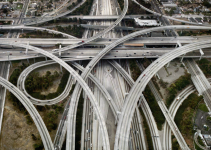 The East LA Interchange is less beautiful, but famously nasty to navigate: 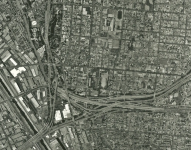 One of my favorite American junctions outside of California (I am vaguely aware that there are other states) is Spaghetti Junction in Atlanta, which manages to do the work of a complex stack exchange without being super-confusing, and looking rather elegant at it by avoiding cloverleafs altogether: 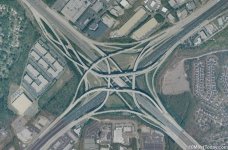