Basic Beliefs
Probably in a simulation

Hi I thought this topic might be permissible in this forum if discussed in a clinical way....

I just watched a movie about a Jewish Nazi called "The Believer". I was interested in the following part: (where the Jewish Nazi is "Danny")

I thought that since he is Jewish and turns anti-Nazi and pro-Jewish in the end this isn't really racist???

GUY
I don't know. Is that right?

GUY
Everybody likes to, don't they?

DANNY
Yes. It's very pleasurable. But the
Jews are obsessed with it. You know why?

DANNY
Because the Jew is essentially female.

DANNY
Real men -- white, Christian men --
we f*** a woman. We make her come
with our c**ks. But the Jew doesn't
like to penetrate and thrust -- he
can't assert himself that directly --
so he resorts to perversions. Oral
sex is technically a perversion, you
know that, don't you?
(as Guy nods)
After a woman has been with a Jewish
man, she never wants a normal partner
again. A normal man.

GUY
Does that mean the Jew is the better
lover?

DANNY
You're not listening. He isn't better.
He gives pleasure, but that's
actually a weakness.
Click to expand...

About oral sex being a "perversion" - well my sisters' Pentecostal pastor once said in a sermon "there are some places where a mouth is not meant to go".

On the topic of pleasure though I heard that men who have been circumcised (like Jewish men) would feel less pleasure.

Once used, to thrilling effect, on a church sign -- you can google this historic sight:

OPEN YOUR MOUTH &
I WILL FILL IT

That's a church I would attend, and I'd sit up front and add to the collection plate. 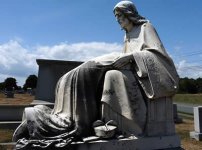 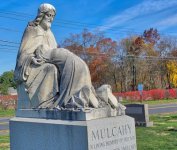 "Your god and the god of your fathers has given you treasure in your sacks." - Gen. 43

Another strange aspect of humanity is the confusion that results from overlaying our base instincts with learned rational thought processes. No one teaches a dog about sex and assuming one reaches maturity with its reproductive parts intact, it maybe clumsy on first try, and who isn't, they know what they want and how to get it.

For a human in the same situation, sex is intricately woven into a fabric of social status and power. Humans are the only species where practically every other human will cooperate to prevent two people from having sex with each other. It's a general pattern, in any culture, the more a woman is considered to be property, the more repressive the sexual mores. Sex between husband and wife is for procreation. Sex with another man's wife is a crime against property. It's the potential to create a fraudulent heir to the family fortune. If a man wants more than a legitimate heir, that's why we have prostitutes.

Anything that could give a woman more power over a man is seen as a threat and sexual desire is easily leveraged to gain an advantage.
J

What the hell are you even asking here? The character is an self-hating anti-semite. Sounds like the script is depicting him as pretty anti-semitic.

Basic Beliefs
Probably in a simulation

J842P said:
What the hell are you even asking here? The character is an self-hating anti-semite. Sounds like the script is depicting him as pretty anti-semitic.
Click to expand...

Well I was wondering whether what he says is true amongst Jews and "Christian" Nazis....

Later on in the movie he is amongst a group of Nazi sympathisers...
https://dailyscript.com/scripts/thebeliever.html

Danny steps to the lectern. The CROWD QUIETS. He stands
silent for a long moment, then closes his eyes and chants
with feeling:

DANNY
Who knows what that is?

DANNY
Can anybody imagine why I would say a
Jewish prayer?

ANOTHER VOICE
Because you're a Jew.

Nervous laughter. Danny laughs with them.

DANNY
That could be one reason. What's
another?
(no response)
Let me put it this way...who here
would like to destroy the Jews?
(murmurs of approval)
Who wants to grind their bones into
the dust?

DANNY
And who wants to see them rise again,
wealthier, more successful, powerful,
cultured and intelligent than ever?

Silence. No one wants that.

DANNY
Then you know what you have to do?...
You have to love them.

DANNY
Did he say love them? Love the Jews?
It sounds strange, I know, but with
these people nothing is simple. The
Jew says that all he wants is to be
left alone to study his Torah, do a
little business and fornicate with
his over-sexed wife.... But it isn't
true. He wants to be hated. He longs
for our scorn. He clings to it as if
it were the very core and mystery of
his being. If Hitler had not existed,
the Jews would have invented him. For
without such hatred, the so-called
Chosen People would vanish from the
earth....
Click to expand...

Earlier in the movie a journalist said to Danny that Danny is Jewish - Danny got out his gun and threatened to shoot him.... so he was trying hard not to let people know. This is the conversation where the original quote comes from....

GUY
Danny, this is great. You're
incredibly articulate. One more
thing... How can you believe this when
you're a Jew yourself?

A beat. Danny smiles at the mistake....

DANNY
What? Excuse me?...
(Guy says nothing)
You're kidding, right?

GUY
Does that mean you deny what he says
is true? Yes or no.


GUN: pulled from Danny's pants, slammed down on the table...
Guy sits back abruptly. Danny picks it up, cocks it....

But when Danny and some Nazis are desecrating a Jewish temple half way through the movie Danny tries to stop them from damaging the Torah scroll.

BILLINGS
How come you know all this shit?

BILLINGS
Fuck you. I hate the Jews at least as
much as you do.

DANNY
No, you don't.... If you hated them,
you'd study them, so you'd know why
you hate them. You know what tefillin
is? Tsitsis? Shotness? You know the
kaddish from the kiddush?
(obviously not)
Eichmann? He went to Israel. He
studied the Torah, the Talmud, the
Mishnah, the whole bit. He hated Jews.

CARLETON
(reaching toward the parchment)
Can we touch it?

DANNY
Yeah, but not on the letters.

BILLINGS
Why the fuck not?

Billings bristles at Danny's authority; Carleton says to him...

CARLETON
Didn't you see Raiders of the Lost Ark?

CARLETON
That was an ark, man. That was a
Torah. They fucked around with it,
and the Torah melted their faces.

BILLINGS
That's a movie, you moron.

CARLETON
Fine, go ahead. Touch the letters.
Click to expand...

In the end Danny plants explosives in a temple with the help of another guy. Then later he gets the temple evacuated (while wearing a Jewish hat) and he stays there and dies in the explosion....

DANNY
Do you want to know the real reason
we hate them?...

DANNY
...Because we hate them.
(as people exchange
puzzled looks)
Because they exist. Because it is an
axiom of civilization that just as
man longs for woman, loves his
children and fears death, he hates
the Jews.
(smiles)
There is no reason. If there were,
some smart-ass kike would give us an
argument, try to prove we were wrong.
And of course that would only make us
hate them more. In fact we have all
the reasons we need in three simple
letters: J-E-W. Jew. Say it a million
times. It is the only word that never
loses its meaning: Jew Jew Jew Jew
Jew Jew Jew Jew Jew Jew Jew Jew Jew....
Click to expand...