Religion is in BIG trouble in Europe.

Europe - Christianity is in big trouble in Europe. The importance of religion among younger people is very low compared to the older generation. It is especially encouraging to see the very low numbers for Poland, Italy & Spain. The myth lasted for 2,000 years.
Click to expand...

One problem I see with this is that only refers to the xtian cult. I'd like to see how it applies to the others, like the rabid islam. 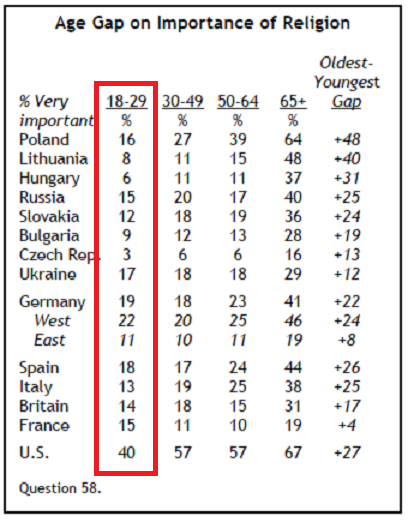 No numbers on Islam, and those would be difficult to obtain, I'll wager. Nevertheless, there's hope in that area of the world. Yes even there where you can lose your life for being an atheist more are speaking out. Those that aren't directly speaking out are finding like minded souls on the Internet. With the adoption of the world wide web, there's simply too much access to information. Inroads are being made. Even Saudi Arabia, which never even acknowledged atheists now label us as terrorists. If that ain't progress what is?

phands, where did you find those numbers?

So going down in age, there is a big drop around 65 years old, with a slow decline afterward. From polls over the years, people in the US tend to be relatively fixed in their religiosity after about 18 to 20 years of age. If that fixity is also true of Europe, then we can ask what made a difference in the childhood and teens of those under 65. Anyone that age this year would have been 15 years old in 1964, and an obvious candidate is the great tumult in the late 1960's and early 1970's that several nations experienced. So did the Sixties cultural revolution decouple many people from organized religion, with their descendants staying decoupled?

This trend of elder religiosity also occurred in former Soviet-bloc countries, including the former Soviet Union itself. Despite Communism, many people there continued to take their opium.
P

I agree with lpetich's request. Sources or it didn't happen.

braces_for_impact said:
No numbers on Islam, and those would be difficult to obtain, I'll wager.
Click to expand...

. . . Agreed, simple demographics, immigration patterns and natality rates would seem to favor an increase of Islam in Europe and a decline of Christianity.

Here's as far as I could track the OP's claim: Europe - Christianity is in big trouble in Europe. The importance of religion among younger people is very low compared to the older generation. It is especially encouraging to see the very low numbers for Poland, Italy & Spain. The myth lasted for 2,000 years but soon it will be gone.. : atheism -- a post in Reddit's r/atheism

I looked further, and I found that table in Pew-Global-Attitudes-2009-Pulse-of-Europe-Report-Nov-2-1030am-NOT-EMBARGOED.pdf -- the Pew Global Attitudes Project of the Pew Research Center:

Two Decades After the Wall’s Fall
END OF COMMUNISM CHEERED BUT NOW WITH MORE RESERVATIONS
November 2, 2009