The central limit theorem has several variants. In its common form, the random variables must be identically distributed. In variants, convergence of the mean to the normal distribution also occurs for non-identical distributions or for non-independent observations, if they comply with certain conditions.

The earliest version of this theorem, that the normal distribution may be used as an approximation to the binomial distribution, is the de Moivre–Laplace theorem.
Click to expand...

The CLT is a foundation for practical statistical analysis and sampling methods. It leads to the sampling distribution of the mean.


Philosophical issues
The principle behind confidence intervals was formulated to provide an answer to the question raised in statistical inference of how to deal with the uncertainty inherent in results derived from data that are themselves only a randomly selected subset of a population. There are other answers, notably that provided by Bayesian inference in the form of credible intervals. Confidence intervals correspond to a chosen rule for determining the confidence bounds, where this rule is essentially determined before any data are obtained, or before an experiment is done. The rule is defined such that over all possible datasets that might be obtained, there is a high probability ("high" is specifically quantified) that the interval determined by the rule will include the true value of the quantity under consideration. The Bayesian approach appears to offer intervals that can, subject to acceptance of an interpretation of "probability" as Bayesian probability, be interpreted as meaning that the specific interval calculated from a given dataset has a particular probability of including the true value, conditional on the data and other information available. The confidence interval approach does not allow this since in this formulation and at this same stage, both the bounds of the interval and the true values are fixed values, and there is no randomness involved. On the other hand, the Bayesian approach is only as valid as the prior probability used in the computation, whereas the confidence interval does not depend on assumptions about the prior probability.
Click to expand...

The code takes the average of a sample size through a random vector. Sort asscebding gives a cumulative distribution. 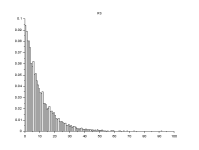 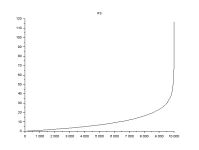 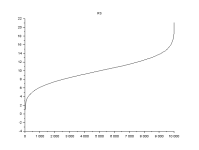 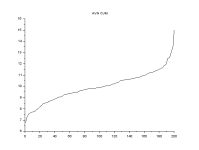 I presume Samples are randomly distributed. Distributions can be partitioned into ratios. Ratios are markers. Ratios can be described as functions. Functions can be represented graphically. Using a ratios of one as a model, it is self evident that ratios can be represented as functions producing sample plots in the classical normal distribution shape.

It seems to me that the central limit theorem can be extended to cover all real number ratios.

I still don't get it. Ratios of Gaussian variates are not Gaussian.
S

Random means no correlation between variables. A random sample enas the sampling event evet has no statistical effect or correlation to the next sampling event. No matter how many times you toss a die the probabilityThe histogram os a sampe group from a normal distribution will be normal. A histogam of random smaple group from an expnntial distribution will be exponential.

is always one in six on the next toss.

An important question in sampling theory is how many samples do you need from a population to have a certin comfdence in the sample parameters?

You have 10000 widgets in boxes, how many do you sample to have high confidence in the estimate of a mean or average value such as weight or size?
S

One of the more remarkable digressions from this topic is the

At first glance they both seem "bell-shaped", though superimposed like this it is obvious that Cauchy has more kurtosis. But in fact, Cauchy variates are ridiculous: "The Cauchy distribution is often used in statistics as the canonical example of a "pathological" distribution since both its expected value and its variance are undefined."

One way to generate a Cauchy variate is to take the ratio of two zero-mean Gaussian variates. Another way is simply to take the tangent of a uniform variate on (-pi, pi). ... And No, sums of Cauchy variates do NOT obey the "Central Limit Law"! 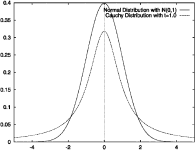 When attempting to use CLT in real life, you will spend the majority of your time attempting to establish that your independent random variables are in fact 1. Independent and 2. Random.

You never blindly apply statistics. You first analyze data samples. Then come up with an approch.

My frist step was always to plot a cumulative distribution of sample data. See if it looks like a known distribution

If you have a gazillion widgets to evaluate pick random samples, plot the means, and see if they are normally distributed.

In reliability and manufacturing I never saw an exception. Once you eliminate or reduce systemic problems, human and manufacturing processes tend to be normal. At least close enough to apply normal statistics.

Way back I used random number tables to derive a sample sequence. People used things like closing stock market numbers to derives a staring point in the tables.

There is a similar principle in reliability engineering. If a system is complex enough once the early failures are gone regardless of the underlying failure distributions of components the failure rate per unit of time will be approximately constant.