The secret history of Christmas

Along the same line
https://www.deviantart.com/concavenator/art/Noctalfus-borealis-425646217 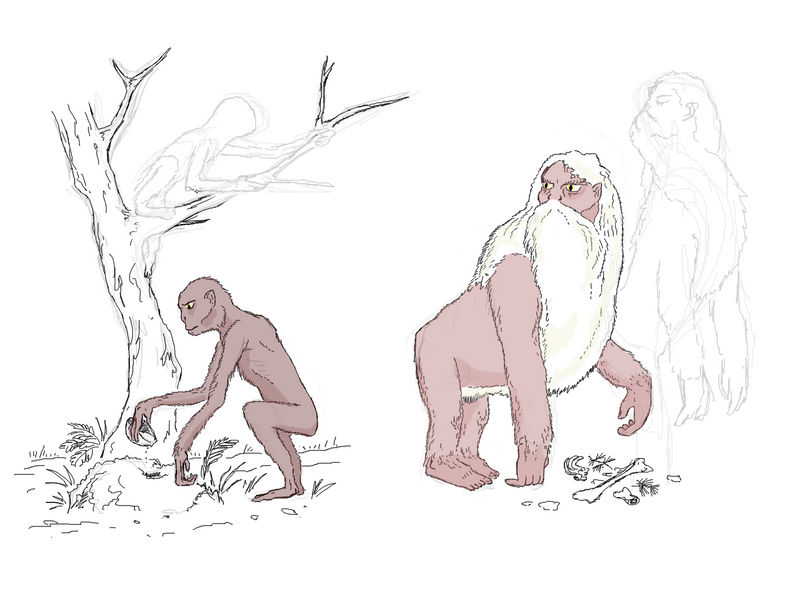 On the left: a young scandinavian elf (Noctalfus borealis) inspecting a bowl of reindeer milk. On the right: a mature klaas.

Creeping like shadows in the dark arctic night, lit only by the glow of the aurora borealis, scandinavian elves are the personification of ancient fears.

Distribution: During the last glacial maximum, as attested both by cave art and by the fossil record, the scandinavian elf was present with several subspecies from Brittany to Korea; today, the last surviving subspecies, N. b. balticus, is restricted to few refugia in eastern Fennoscandia. They used to thrive in the vast boreal forests, often probing the wasteland at the feet of the glaciers, hunting and gathering any sort of food, from pinecones to small rodents. Troops of elves contain usually 10-15 members, mostly the harem and children of a single alpha male.
Physical appearance: Scandinavian elves are unusually slender compared to other creatures of the tundra, as they rely on agility to hunt and avoid predators. This forces them to consume a great amount of energy, and thus to keep their population density extremely low. The arms are longer than the legs, and retain grasping fingers, causing them to knuckle-walk, while the feet are very long and human-like. The face is relatively flat and equipped with large eyes, but the mouth is armed with powerful all-purpose teeth, like those of a hog. They can move surprisingly quickly, both on the trees and in the open ground.
The alpha male is significantly different from other individuals: it weighs over twice as much and it has an enormous chest covered by a white beard/mane. While it's significantly less agile than the others, it exceeds them by far in brute strength; although rarely seen, the Sami people call it Klaas, from the name of a fearsome warlord that reigned in that region centuries ago. Often the vernal thaw sees a newly matured klaas battling the former head of the troop; the loser is cast away and rarely survives long, unless it manages to conquer another troop.
Classification: While scandinavian elves are definitely primates and most probably apes, their further classification is highly controversial; recent studies have linked their ancestry to the enigmatic Denisova hominins, which implies an extremely recent divergence from the human lineage. Although elves appear to be more intelligent than any other non-human animal in their environment, they're not known to use extensively tools outside of folklore.
Interaction with humans: Usually, elves aren't very dangerous to adult humans, which they learned to avoid, but they're fiercely territorial, and often attack newcomers. Lithuanian sagas proudly recount how the elves of Vilnius stopped an invasion by the Teutonic Knights by crippling their horses, while Karelian elves are said to have hindered the advance of Soviet troops during the Winter War. It's likely, however, that these accounts have been exaggerated - very few attacks to humans have actually been recorded.
Hungry troops of elves have been feared by the reindeer herders of Finland since the Neolithic, as they often steal calves. They're adept hunters, and they easily kill small animals such as lemmings or ptarmigans; however, they rarely find sugar-rich foods, and they has been observed to abandon a fresh prey to carry away such foods. For this reason, the people of Lapland have the custom, during the long nights around the solstice of winter, to leave reindeer milk and sweet bread near the doorstep, to have the elves spare their livestock and sometimes leave abandoned preys. Local legends claim these to be "gifts" from the Klaas, identified with ancient kings and even bishops from Eastern Europe - likely a legacy of the traumatic christianization of the Baltic people in the Middle Ages.
P

Santa is definitely Odin-ish, especially in aesthetics, but the "facts" cited in that comic are mostly nonsense, not tied to any primary sources of pre-Christian Norse beliefs. It was always explained to me, for instance (I was raised Swede-tinted Lutheran) that the custom of leaving straw in shoes was to fend off the Tomte (little gremlin-like gnome things with funny hats) not to ingratiate either Odin, Santa, or Jesus. The Tomte were their own thing. Which makes more sense, since gnomes are house spirits. If the straw is supposed to be for Sleipnir, why on earth would you leave it by the hearth? You'd want to put it out in the stables, yeah? If it's inside, Sleipnir will have to come inside to get it. You don't want that. He's the size of a house, and he's got eight razor sharp hooves. This is a recipe for disaster. I guarantee you, if that flesh-eating half-horse half-centipede monstrosity gets inside the house somehow, there will be no festivities this year.

Do they really not teach anything about Norse culture in European schools? I thought it was just us.
P

Politesse said:
I guarantee you, if that flesh-eating half-horse half-centipede monstrosity gets inside the house somehow, there will be no festivities this year.
Click to expand... 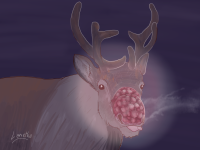 Also known as the torch-nose reindeer, this animal has a symbiotic relationship with bioluminescent bacteria, which allows it to illuminate its nose with a beautiful red glow. The bacteria produces light in the red wavelength, and inhabits the skin in the form of pustules that form in the reindeer's nose, giving it a bumpy texture. The light is produced when a physical stimuli is applied to these unicellular organisms, be it through shaking, vibration, sudden acceleration or deceleration, etc. In this symbiotic relationship, the reindeer provides the bacteria with nutrition, water, and a warm and stable environment, and occasionally transport between different bodies of water. But what does the reindeer get in return? 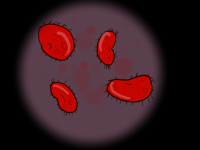 The torch-nose reindeer is able to use the light produced by the bacteria for its own benefit. Through its evolution, this animal became one of the only ungulates to be able to see red light (studies suggest that their eyes' capabilities coevolved along with the specialized nose). They use the light for communication, and it also helps the herd (specially the young) to stay together and locate each other when it's very dark or during blizzards. This is useful to them, since they live very far up north, where nights can last months and snow and storms are somewhat frequent. An advantage of the red wavelength is that their predators cannot see it, which allows the reindeer to use its torch-nose with more freedom, without worrying about being a lighthouse for danger. There's also a factor of sexual selection to their bright noses, since males during the mating seasons get an elevated concentration of bacteria. The higher concentration is caused by hormone secretions, which hastens the bacteria's reproduction cycle, and gives the nose an even bumpier texture (more numerous pustules), and the ability to produce almost 4 to 5 times as much light. 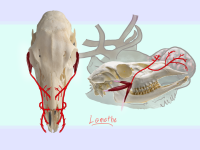 When they are not in mating season and when sunlight is plentiful, the concentration of bacteria, and consequently amount of light produced, is greatly reduced. The bacteria is passed from the mother to the offspring right after birth, when she licks the placenta off from the newborn, but can also be passed through other social interactions between parent and offspring. But the light production will only happen when the calf is a few months old, for only then the bacteria will be plentiful enough to provide significant brightness. In this period, the light is faint and involuntary. Only when they reach puberty, the nose vessels will be developed enough to provide voluntary control. Speaking of which, the control of the nose's light happens through the contraction of a few bilateral specialized muscles. When they contract, they pump blood through the nose's arteries, which causes a disturbance. The blood rush acts as physical stimuli for the bioluminescent bacteria, which then glows with a red hue. In short, the torch-nose reindeer controls the luminosity of its nose through the control of these muscles. 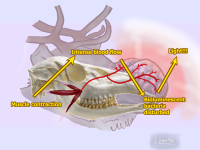 This animal has other adaptations too, to fit its lifestyle, such as plenty of lymph nodes on their face and neck regions, as well as membranes secluding most of their noses on the inside (to prevent infections on unwanted places by the bioluminescent bacteria). Their eyes also contains specializations to prevent then from being blinded by their own lights, as well as to prevent their pupils from contracting in response to red light (in this manner, their eyes can remain adjusted to the dark). 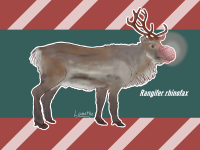