PZ Myers over on Pharyngula has an interesting blog piece about Occam’s razor.

I’m working on the final exam for my introductory biology course which is laced with Darwinism, but also with the philosophy of science, and early on I’d introduced them to Occam’s Razor. I’d tried to explain to them then that while it’s a useful operational tool in designing appropriate experiments, it’s almost never true that the simplest answer is the correct answer, at least not in biology. And then I stumbled across this article on Simplicity in the Philosophy of Science by Simon Fitzpatrick that summed up that same point nicely.
Click to expand...

The linked article is quite lengthy, and I’ve only skimmed it, but it essentially makes the point that Occam’s Razor (simplicity of theories), while it may be useful, is tricky to justify philosophically.

… very many scientists continue to employ practices and methods that utilize notions of simplicity to great scientific effect, assuming that appropriate solutions to the philosophical problems that these practices give rise to do in fact exist, even though philosophers have so far failed to articulate them.
Click to expand...

It's also true that, as PZ notes, simplicity is not the sine qua non of scientific theories and hypotheses.

As a physicist, I always read Occam’s Razor as saying the simplest theory *that fits all the observables*. In practice this means don’t use more variables than are needed to fit the data.

If a simpler theory doesn’t actually work, then it’s not better than a more complex one that does work. But if you add more complications that either don’t fit the data or add no more explanatory power or are simply unsupported by the data then Occam would say cut those out.

"Entities should not be multiplied without necessity." Or as Einstein said “Everything should be made as simple as possible, but no simpler.”

That Einstein quote is an Occam’s razored version of what I said.

That Einstein quote is an Occam’s razored version of what I said.
Click to expand...

Before you apply the principle test to be sure you have actually identified every variable as such. Usually you can do this by applying least variable tests such as least dimension definition and least variable resolution.

Caveat. Least number presumes all variables are verified as testable.

I don't find "Occam's Razor" as usually stated to be useful in the slightest. This may because I'm a social scientist rather than, say, a physicist. But most systems we study are sufficiently complex that seeking simplicity above all else is as apt to steer you into a dead end created by your own flawed generalizations as anything else. My field is constantly beset with amateurs who pop up with some brilliant "theory that explains everything" but actually accounts for nothing. Einstein's caveat, to put it simply, is so often needed that it obviates the usefulness of the "rule".

And I don't think it is just the social sciences, actually. I have plenty of colleagues in other fields, and I don't once recall ever having a conversation about a serious scientific issue or hypothesis where they were like "and then I applied Occam's razor". Sometimes a more generalized parsimony is invoked in very specific circumstances, but not so much as an argument in and of itself so much as a way of sorting between known options. Like, if there's a simpler way to explain the same data set, people will naturally gravitate to that once they realize that, just like PZ Myers in the above examples. It will be much easier to base a model on a theory with less moving parts. But that isn't, in and of itself, a reason to believe that the simpler option is actually correct. Step 2 is to actually test the new hypothesis. If you skip step 2, you're not doing science. So I quite agree with Myers and Crick that if it's going to be applied, it should be at the beginning, not the end, of a scientific methodology.

So although Occam's Razor has come to be culturally associated with the sciences, I don't think it actually reflects a scientific mindset. If I were to propose a general rule of thumb for the sciences, social or otherwise, it would be:


If I were to keep Occam's Razor, but modify it, I would modify it to:


"All things being equal, the simplest answer is a good place to start."​
My issue with it is less the idea of parsimony as a general concept, than with the assertion that simplicity and truth are inherently correlated. They aren't. If anything, I think the principal value of testing the simplest model is because it is very often instructive to understand how and why it fails to explain your full data set. I think there's great value in saying "Alright, suppose all human interactions are motivated wholly and entirely by rational self-interest", not because it's true or even likely to be true, but because you learn quite a bit from carefully observing what such a lazy generalization can predict effectively, and what it can't.

The final line of that blog is especially painful to me right now btw... it's grading season.

Well you are about to read about another social scientist who actually does see the use of Occam's razor. As a Neuro-Physical Sensory Psychologist I used the principle to determine how many dimensions my statistical analyses required to get usable information from my experiments in psychophysics. I applied material stimuli in experiments to divine perception of acoustic response parameters of humans, monkeys, dogs, rats, etc. Obviously the scales were subjective, often nonverbal, indices.

Very useful. As an example look at current status of Damage Risk Criteria in the workplace. Or maybe you would rather look at how we got to WYSIWYG.

I think you are wrong headed to dodge into the world of treating error as result. Yes there may be many variables in what you are interested. Practically you should try to parse out that which can be treated orthogonally methodologically. Leave the rest for further consideration after you have set some baselines for dimensionality you can obtain. Don't try to skip steps except to get an idea of just how complicated is your task for finding usable answers. As a practical matter I refer you to the work of the father of Social Psychology, Kurt Levin.

That Einstein quote is an Occam’s razored version of what I said.
Click to expand...

And yet it is the crucial part. Without that the first part loses its useful meaning almost completely.
U

The reason Evolution is attacked by the religious is because when you apply the idea of parsimony to the Theory of Evolution there is no need for a god.

Parsimony in terms of evolution would be to do away with any guiding intelligence.

The leg did not evolve because some intelligence designed it.

It arose by chance and was refined by chance.

Nothing but chance mutation guided the transformation from a small protruding bump to a functioning limb.

The helpful mutations remained and the less helpful disappeared.

An animal is mutation on top of mutation. Mutation all the way down.

We are all mutants.
S

I see it as informal logic, not any kind of design tool or rule.

Occam's Razor says if you are walking in woods in the USA and hear the sounds of hoofs it is more likely to be a horse and not a zebra.

I take the maxim to mean don't jump to complicated answers without first cantering the obvious. Like ETs and UFOs.

It can apply to design. There were those I knew who always jumped to a complex solution when there was an obvious simpler way.

It is not called Occam's Rule or Occam's Law.In the first sofware class I took the instructer walked into the first class and without speaking wrote KISS on the board.

He turned to the class and before anything else he said "Keep It Simple Stupid".
U

Design is an artistic endeavor too.

The Skyway bridge in St Petersburg Florida is a beautiful piece of art. 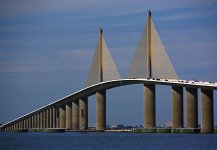 
untermensche said:
Design is an artistic endeavor too.

The Skyway bridge in St Petersburg Florida is a beautiful piece of art.

Your response sounds exactly like General Motors design team whistling form follows function which it needn't. Maybe you don't remember those 'beautiful' wings on rear fenders of GM products in particular back in the late '50s.

More on point Galloping Gertie Bridge at Tacoma narrows was beautiful too until a breeze came up.
S

Christians are not the only ones who always take 'scripture' literally.

In the firs SW class I took in the 70s, FORTRAN, the instructor walked in and without saying anything wrote KISS on the board.

He turned around and said "Keep It Simple Stupid". Never forgot it.

Invention and discovery is a complex social process and a process of the brain. People try and reduce it to simple clichés and rules.

steve_bank said:
Christians are not the only ones who always take 'scripture' literally.
Click to expand...

Christians are in no position to take scripture literally. They have to rationalize away the contradictions.

Atheists, on the other hand, get to read literally and point out the contradictions.

Then their collective associations come under scrutiny and another religion pops up.