PM Wanders Into Blue Mountains With Jerry Can And Matches

I like Aussie satire, but the straight up sarcasm is even better.


PM Wanders Into Blue Mountains With Jerry Can And Matches In Last Ditch Effort To Change News Cycle
And they give you a photo:​ 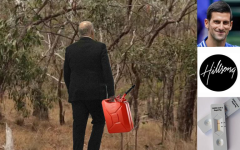 The Prime Minister was quick to join the media pile-on of Djokovic, in an effort to kick the can down the road and avoid talking about the fact that supermarkets around the country are literally running out of fresh produce.

The theatrical cancellation of Djokovic’s visa was, by Scotty From Marketing’s standards, actually quite an incredible distraction from the fact that it is impossible to find these Rapid Antigen Tests that our government insists on not providing for free.

On top of this, it has today been revealed that Scott Morrison’s beloved Hillsong Church is the only institution in the country that has received exemptions to play music and dance – because their political connections and donations actually prevent the virus from spreading amongst Pentecostal Christians, unlike those dirty pubs and concert halls that are trying to play the type of music that God doesn’t look fondly upon.
Click to expand...