Today in history: The Battle of Bamber Bridge

In the 1940s US troops were still segregated into black and white under the 'Jim Crow' laws, and there were several incidents of racial tension and confrontations around the army bases in Britain. Britain was overall a more tolerant society where troops were not segregated, and so black and white American troops were welcomed as equals by the local people.

On 24th June 1943, white Military Police (MPs) attempted to arrest several African American soldiers from the racially segregated 1511th Quartermaster Truck Regiment who were drinking with locals at the Ye Old Hob Inn, in Bamber Bridge. A white British soldier challenged the military police: “Why do you want to arrest them? They’re not doing anything or bothering anybody.”

After the arrival of more military police armed with machine guns, black soldiers armed themselves with rifles from their base armoury. Both sides exchanged fire through the night. One black soldier, Private William Crossland, was killed and several MPs and soldiers injured. Although a court martial convicted 32 African American soldiers of mutiny and related crimes, poor leadership and racist attitudes among the MPs was blamed as the cause.

This photo was taken the following day, once the soldiers were court marshalled.

The people of Bamber Bridge did not share the US Army’s segregationist attitudes. According to the author Anthony Burgess, who spent time in Bamber Bridge during the war, when US military authorities demanded that the town’s pubs impose a colour bar, the landlords responded with signs that read: “Black Troops Only”. 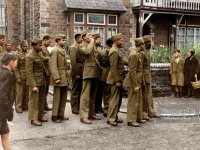