What are you reading?

TV and credit cards said:
Children of Time. I hope it's good. I just finished Project Hail Mary. Excellent read. Now I've been reading sample after sample and everything seems so low energy.
So I didn't bother with a sample of Children of Time.
Click to expand...

I love Children of Time. Tchaikovsky has an incredible imagination, and a real flair for building believable worlds that are simultaneously truly alien.

Not a good book for arachnophobes though.

I too love Children of Time.

It made me track down some of his other stuff, also good, but Children of Time may be amongst the best conceived and executed SF I've read.

And I've read a fair bit.

Many people have recommended it to I purchased Children of Time for read on my Tablet. I haven't gotten to it yet.

I re-read all the Harry Potters in the last 2 month or so. I'm re-reading the last two. Eventually I need to move along. There are other books I've read that I'd like to re-read but I don't know what to get.

I tried reading a soft cover book and the text is too small and hardcover books are too large and heavy. I like reading on my tablet but it means buying books I have on paper.

I like to read on my tablet. It's light, reasonably large and the type is big.

Back in the 1990's when I was traveling all the time for work I would mainly read Star Trek novels. Hundreds were written and many were really good. I have a lot of them still - on paper. My son has read them all.

spikepipsqueak said:
I too love Children of Time.

It made me track down some of his other stuff, also good, but Children of Time may be amongst the best conceived and executed SF I've read.

And I've read a fair bit.
Click to expand...

Shadows of the Apt was a bit too ‘fantasy’ and not quite enough ‘sci-fi’ for my taste, but the fact that I nevertheless read the whole series suggests that it’s very much above average for the genre.

Walking to Aldebaran is incredible. As is The Expert System’s Brother.

Your post prompted me to go away and put a few more of his on Hold.

The library doesn't have access to Walking to Aldebaran. Is it recent?

I've read Cage of Souls, The Expert System's Brother, Guns of the Dawn, 1 1/2 of the Apt series, Children of Time, Children of Ruin .

I'm going to take a break from Apt after I finish this one. Just finished a Matthew Reilly book, on the recommendation of a 12 year old, and I need to read something that isn't 50% grisly killing.

In my search I noticed a sequel to The Expert System's Brother. Also, lots of books published 20/21. Hope the quality is maintained.

spikepipsqueak said:
The library doesn't have access to Walking to Aldebaran. Is it recent?
Click to expand...

He also lives in my old home town.

I am disappointed to say that I have never met him.

Year of Meteors, about the 1860 US Presidential election.

Tharmas said:
I'm two chapters into Not in Our Genes: Biology, Ideology and Human Nature, by Richard Lewontin,, Leon Kamin, and Steven Rose. It's a classic, originally published in the 80s, but in a revised edition (2017). Actually, in the Preface they say not all that much has changed since they wrote it, so heavy revisions were unnecessary.

I'm really enjoying it. Each of the authors is/was a heavyweight in his field. They go after a lot of sacred cows involving biological determinism, evolutionary psychology, and the like. They share a strongly political perspective on how much science works, claiming that many current widely accepted "scientific" paradigms have at their basis social and economic assumptions that are far from established fact. No, they don't go after particle physics or claim that mathematics is a reflection of the patriarchy. So far, it makes a lot of sense.

This one ended up on my to read list as well, I picked up a library copy this afternoon.

I keep making plans to finish books (as noted above) but my interest ends up petering off before I finish. In reality that's the right way to do it, but I do plan to get through Dawn of Everything when time and interest permits.
R

I picked up something a little more unique this week..

It's a four volume set originally published in the 1850s. Reproductions can be found but I actually bought original copies. My favourite local posted about them online, and as broad histories like this are right up my alley I decided to buy. They look a little ostentatious on their shelf, but I actually plan to go through them (very carefully).

I've spent a bit of time with them already and have to laugh as they're rife (as you'd expect) with references to 'civilization'. It's pretty entertaining.

A friend and ocassional advisor of Herman Melville's; he popped up in a biography of Melville that I read a little while back.

rousseau said:
I picked up something a little more unique this week..
Click to expand...

Point of order - “Unique” means “The only one of its kind”.

The phrase “A little more the only one of its kind” is nonsense.

“Unique” is a superlative, and therefore cannot be modified with such adjectives as ‘more’ or ‘very’.

I am re-reading the Harry Potters again.
R

rousseau said:
I picked up something a little more unique this week..
Click to expand...

Point of order - “Unique” means “The only one of its kind”.

The phrase “A little more the only one of its kind” is nonsense.

“Unique” is a superlative, and therefore cannot be modified with such adjectives as ‘more’ or ‘very’.

I've been a creative writer for twelve years now, words, grammar, and sentence structure is how I fingerpaint.

I took a few images of the books, here is the clearest one: 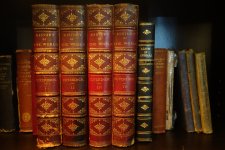 When you get around the fact that most people who'd buy something like this today would be doing so to show off, they're actually quite beautiful books. It took me a few days to see it, but now I'm imagining living in the 1850s, no electricity, and you've got this beautiful set of books with an enormous amount of interesting info contained in them. During a period like that, you could maybe see why everyone was so keen on civilization.

Unfortunately, my other antique books (above is a few of them) look pretty unspectacular next to them.

The oldest book that I am aware of having was printed in 1915. A Thornton Burgess Mother West Wind animal stories book.

My oldest book is a reference Bible passed down through the family, printed 1925. Neither rare nor unique as a book, but it's got my great-grandmother's handwritten notes all over the margins.
R

My oldest is called 'Philosophy in Sport' published in 1827. It's not very valuable, I just bought it at the time for it's age.

There hasn't been much method so far to my antique buying, I have about 15 - 20 books and piles of magazines of different flavors. Other than this set the most interesting I own is an original David Livingstone, Robert Burns Kilmarnock edition, Time magazine from WW2, and a few editions of Canadian Magazine from the late 19th century.

I also own a number of early Canadian and Scottish (grandparents) school books as that stuff is a dime a dozen. Eventually I plan to stretch back further than the 19th but that's more of a project to find what I want.
Last edited: Jun 18, 2022
R

The Third Way by Anthony Giddens. I ordered it at some point in the past few months, and have read some of it. Clearly I'm biting off more than I can chew lately.

So far it's offered a pretty good review of where modern politics stand. I also learned that Canada's New Democrats literally have socialist origins, and why they rarely win elections.

Eric Frank Russell's classic sf novel The Wasp, which is basically "how to be a saboteur: the novel."