Elixir said:
(Of course if they were black, the gutters would be running with blood)
Click to expand...

I don't see any rivers of blood. Not even a paper cut.
Click to expand...

You also don't see them on the doorstep of an elected official, threatening them for something that didn't happen.
Click to expand...

I'm going to make that my cover photo on Facebook. lol
D

Extremist heavily armed militias are apparently "good" if their members have the correct skin color.

Extremist heavily armed militias are apparently "good" if their members have the correct skin color.
Click to expand...

No, Einstein. It's because it triggers cowardly, hypocritical, right wing authoritarian morons of the correct skin color.
D

So we have some more "protester" misconduct ...

And as usual, we have to start in Portland.


Oregon Live said:
Uncertainty heightened late Tuesday outside a North Portland home where 150 people huddled behind makeshift barricades to prevent the ouster of a Black and Indigenous family who owned the home for decades.
Police had clashed with demonstrators outside the Mississippi Avenue home hours earlier. Officers retreated, and occupiers dug in.
Mayor Ted Wheeler said late Tuesday that he had authorized police to “use all lawful means to end the illegal occupation.” Demonstrators remained outside the house late Tuesday night amid the rain.
Click to expand...

Wheeler is a weak mayor. When police have to retreat in the face of extremist takeover of a city block, you are dealing with leadership unfit to serve.

The initial confrontation between police and protesters unfolded hours earlier after police arrived to help the property’s legal owner fence off the house. After the Kinney family failed to make payments on a second mortgage to what they contend was a predatory loan company, the lender sold the house to the highest bidder, a development company, at a 2018 foreclosure auction. The family unsuccessfully challenged their removal, with the final ruling that they must depart the property issued in September.
Click to expand...

They were supposed to be evicted in September and they are still there?
And I suppose #BLM/Antifa believe that black and "indigenous" people should not have to pay their mortgages but should be able to live in a house for free?

William Nietzche, 35, walked through his childhood bedroom and pointed out the places where he said officers rifled through his belongings. The closet door in his childhood bedroom appeared to have been ripped off, leaving a small strip of wood still on its hinges. Nietzche and six others were arrested by officers who arrived at the home early Tuesday morning. Portland police said many of the people arrested were trespassing on the property.
Click to expand...

Wait, Nietzsche? Oh, looks like that's an assumed name. Also turns out he is a "sovereign citizen", claiming that US laws don't apply to him because he is a "Moop" and thus follows "Moroccan Law".
Here’s what the ‘sovereign citizen’ defense is, and how it’s linked to the Portland ‘Red House’


KGW8 said:
Kinney, the son of the family living in the "Red House," has claimed to be a Moorish sovereign citizen since at least 2007.
In a YouTube video, Kinney said, “I am an aboriginal indigenous to the land.” In 2018, his parents lost their home to foreclosure, and Kinney — who changed his name to William X Nietzche — tried to fight the foreclosure in court, filing dozens of appeals.
“They have used this kangaroo court to try and eject my elderly mother and father on 20 or 30 occasions,” Kinney said in the video.
He continues to say he tried to “seize the court” under Moroccan law with a man named Omari Gibberi, but the video and court filings become hard to follow.
Click to expand...

Turns out he is not what is normally referred to as "indigenous" (i.e. Amerindian) but rather a black guy who believes his ancestors were here before anybody else for some reason.


back to Oregon Live said:
Police said while officers were standing on the property’s perimeter, a crowd began to gather and officers were struck by projectiles such as rocks and paint-filled balloons.
Click to expand...

Otherwise known as "peaceful protesting" in the #BLM/Antifa Newspeak.

After fence and cleanup crews finished their work Tuesday morning, officers left the area, police said. But the crowd pulled down the fence and entered the property, spurring police to return. Those officers were outnumbered by the 200 people who had amassed in opposition of the police action to remove the family.
Click to expand...

Kate Brown should send in the National Guard if gutted Portland police force is not sufficient. Arrest the insurrectionists and charge them.

Protesters confronted police. Law enforcement ultimately retreated as police vehicles were damaged, including at least one window smashed. Protesters threw rocks at officers, and one sprayed a fire extinguisher at them, prompting an officer to deploy an impact munition.
Click to expand...

More "peaceful protesting" I see. But if police use tear gas or pepper balls (sounds delicious, like spherical fried jalapeño poppers) on the rioters, then they are the bad guys.

The tense scene quieted after police left about 10:30 a.m. Demonstrators took the fencing erected earlier and built barricades around the property, known as the “Red House on Mississippi.” They piled up rocks and bricks, ostensibly as projectiles for any further clashes. Some people also prevented certain members of the media from accessing the area inside the barricaded zone.
Click to expand...

This is CHAZ all over again, but this time in Portlandia. And Wheeler shows no more leadership qualities than Durkan.

And the "peaceful protesters" occupying territory in Portland are escalating by arming themselves. But I guess heavily armed left-wing militias are ok, right?


KOIN said:
“A lot of the security you will see inside the zone is people with long arms, 9MM military Glocks and what-not along with stashes on the ground, either rocks, bottles, things to throw at the police, you know, if they decide to come in,” Johnson said.
“One of the things that I saw immediately when I went in was just how fortified it was, even a day later, probably double the armaments, double the security.”
Click to expand...

And the Moopish family at the center of all this apparently owns another house in Portland. So the rubes occupying territory on their behalf and donating to their GoFundMe are almost as dumb as the rubes donating to Trump's "Stop the Steal"...

One of the things that they wanted was a letter from PPB stating that anyone that’s in the autonomous zone will not be arrested or prosecuted if they start to take down the barricades,” he said.
Click to expand...

Wheeler must definitely not do that, or he will embolden #BLM/Antifa to do it again and again to get their way. All the occupiers must be arrested and prosecuted to the full extent of the law!
D


Star Tribune said:
Three people were indicted Thursday in connection with fires set inside Target's world headquarters in downtown Minneapolis amid rioting over a false rumor that a Black man had been killed by police.
Indicted on Thursday in U.S. District Court with conspiracy to commit arson are Shador T.C. Jackson, 24; Victor D. Edwards, 31, of St. Paul; and Leroy L.P. Williams, 34, of Minneapolis.
Detention hearings have yet to be scheduled. Jackson and Williams are in custody, while Edwards is residing at a halfway house, the U.S. Attorney's Office said.
According to the federal indictments and other court documents:
Arson and looting erupted on the evening of Aug. 26, when Eddie Frank Sole Jr., 38, fatally shot himself on Nicollet Mall shortly after he was suspected of shooting and killing another man. Sole's suicide sparked a false rumor that police had killed him.
Click to expand... 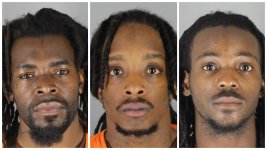 But I bet people on here will claim how it was all a "false flag" attack, right?
D

This illustrates why it is dangerous to "protest" in the middle of the street. Especially if you accost motorists such that they feel threatened.


Teh Grauniad said:
In one video showing the car’s movements, a small group of protesters could be seen gathered around the car as it slowly approached an intersection, with one person seemingly leaning over the front of the vehicle. The car suddenly accelerated, knocking aside the people who were blocking it and people who were in the intersection.
Click to expand...

Angry Floof said:
No, Einstein. It's because it triggers cowardly, hypocritical, right wing authoritarian morons of the correct skin color.
Click to expand...

Nobody here is triggered (except you perhaps). You are also the only one who is hypocritical - you condemn conservative/white militias but support left-wing militias, especially when they are black.

I say pox on both their houses. Extremism - from either side - will get us nowhere.

Why bail money back to arrestee in Portland and not the person who paid bail?

Basic Beliefs
Don't be a dick.

Do you think the Rittenhouse kid will return the bail money to Ricky Schroeder?